Of course I can't have a completely selfless blog...check out The Lauter Tun Craft Beer Bar website and sign up for our newsletter.

It has been a couple of months since my last post.  Work has taken over my life lately, but, alas, I have returned.

For my birthday a while back my friends decided to take me to Kansas City, MO for some brews, blues, and BBQ.  I immediately sprung into action seeking reviews on the best and most unique places to eat and drink through the weekend, focusing on bars/breweries all within walking distance of one another.  I will post  on my other great findings in the area shortly, but for sake of time and attention span I will just talk about the main reason we visited KC and that was for Boulevard. 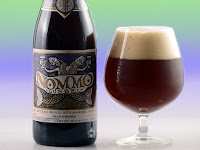 We first went to the Tasting room to wait for our gracious host.  While all the tour goers were drinking 4oz samples, we were given full-sized Belgian glasses while we waited to go on our private tour...off to a good start!  We tried Nommo which is a Belgian Style Dubbel.  And it was, as I was told by the brewer, EXTREMELY fresh, and damn was it delicious.  Wonderful dark fruit flavors of raisin, plum, perhaps fig, and some great light pepper flavors accompanied by some toffee notes.  To be completely honest, I can't remember ALL the beers we started out with as it turned into that kind of day.  Jeremy explained a little bit about all the various beers on tap in the tasting room and required we try the ones that rarely get out of the state. 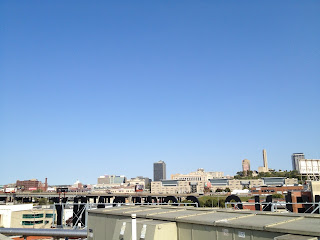 Next we visited the smaller brew house as he showed us all the digital components and the overall processes and differences between the larger and smaller brewing gear.  Then back to the tasting room for some beer.  Then up some stairs to see the grain mill and hopper.  Then some more beer samples... Without going into too much detail, we walked for miles all over the brewery, the packaging area, the beautiful reception area (where they often hold weddings), the barrel aging room etc.  We then traveled up a plethora of stairs through hallways, and rooms and eventually made our way to the roof.  With a fresh beer in hand, we drank beer on the roof next to the BLVD sign overlooking the entire city.  What a sight!


Arguably one of the coolest parts of our tour was getting to hang out in the lab with "Science," the nickname for the lab tech.  We got to check the yeast propagation to some extent, see a massive deep deep freezer (which Jeremy doesn't like since they wont let me him make dip-n-dots in the freezer) and we got to try a couple of aged beers being used for taste comparisons.  Lastly, we were able to drink beer directly off the taps in the lab.  This may not sound as cool as it really is.  To my knowledge, this is the FRESHEST beer directly off a vessel or keg or bottling line.  The tap box in the lab is used for last minute quality control and boy is it tasty.  The regular wheat beer was so incredibly fresh and delicious I wish we could get that beer in Omaha that fresh.  We were also able to taste Nutcracker which I have had numerous times in the past, but, I have never tried it right after the dry hopping.  Frankly, I didn't even know it was dry hopped every other time I had tried it because they actually sit on that beer for months before distributing it!  It is great regardless but it is a delicious, dry-hopped, masterpiece when it is only days old.

After going round and round the brewery, we finally came to a stop once again in the tasting room.  To my knowledge, a normal tour takes approximately 45 minutes, maybe less.  All in all, ours lasted approximately 4 hours.  4 wonderful, laugh-filled, beer-filled hours.

All in all, one of the best tours and best tour guides we have ever had at ANY brewery.  Thank you so much Jeremy Danner and Boulevard Brewing for being such great hosts.

Thanks all for reading.  Check back to hear a bit about some of the other amazing beer bars in KC.